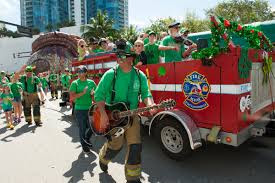 This Saturday March 12th, 2016 at 9 a.m will be the kick off to the renown Fort Lauderdale Saint Patrick's Day Parade and Festival. Thousands of spectators will gather on downtown Fort Lauderdale area to celebrate everything Irish! The festival features live music by the Joe Doughtery Band, a drum line competition, the mayor's welcome and the Irish Blessing, performances by drake School of Irish Dance, Celtic Bridge and various others in there Irish garb! The celebration begins at 9 a.m. and it is free to attend. The parade will begin in Huizenga Plaza, located at 1 East Las Olas Boulevard. For more details call 954-463-3372.

Downtown Hollywood will be turned into a sea of green on Sunday, March 13, 2016 for the St. Patrick’s Day Parade & Festival. The 18th year of this annual event features a traditional float parade beginning at 1:00 p.m. A variety of floats, pipe and drums, marching bands and business entries participate in the parade along with the famous New York Police Department Emerald Society Pipes and Drums. The parade route will wind its way through downtown beginning at Harrison Street and 21st Avenue, continuing north to Hollywood Boulevard, east to Young Circle south to westbound Harrison Street returning to 21st Avenue. Wear your green and be prepared for the excitement of the day as you plan to arrive early for best viewing locations along the parade route. For more information call 954-921-3404
Posted by Distinct Estates Copy at 8:16 AM